Beacon Theatre was designed by Fred Bishop, the same architect as the Byrd in Richmond. Built in 1928 by the Knights of Pytheas it began as a silent movie and Vaudeville show palace. Stars such as Sally Rand, (famous burlesque dancer); Lash LaRue, Cowboy performer who taught Harrison Ford how to crack a whip performed in the Beacon in the 1930’s-1940’s. In the 1950’s-1970’s, The Beacon was primarily a movie house.  Many of the young and old alike of Hopewell met their sweethearts for date night.

In 1981, the theater was abandoned and sat vacant.   During that time there were many attempts to breathe life back into the old theater, however none were successful until 1999.  A group of citizens with the help of the City were able to complete Phase 1 to stabilize the decline and open event space.  However, restoring more was beyond the funds available. In 2011, the project was returned to the City of Hopewell.  City Council took action to finish the project in time for the centennial celebration of Hopewell in 2015.  Their goal was to restore the Beacon to play a major role in the cultural and recreational life of the area. By 2012 a restoration design for the Theater and backstage was complete and renovation began.  As a historic building the Theater was eligible for historic tax credits which will return funding to the overall investment of $4.2 million. 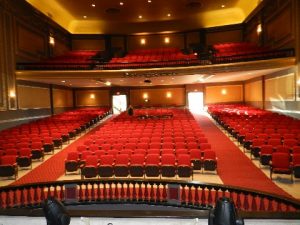